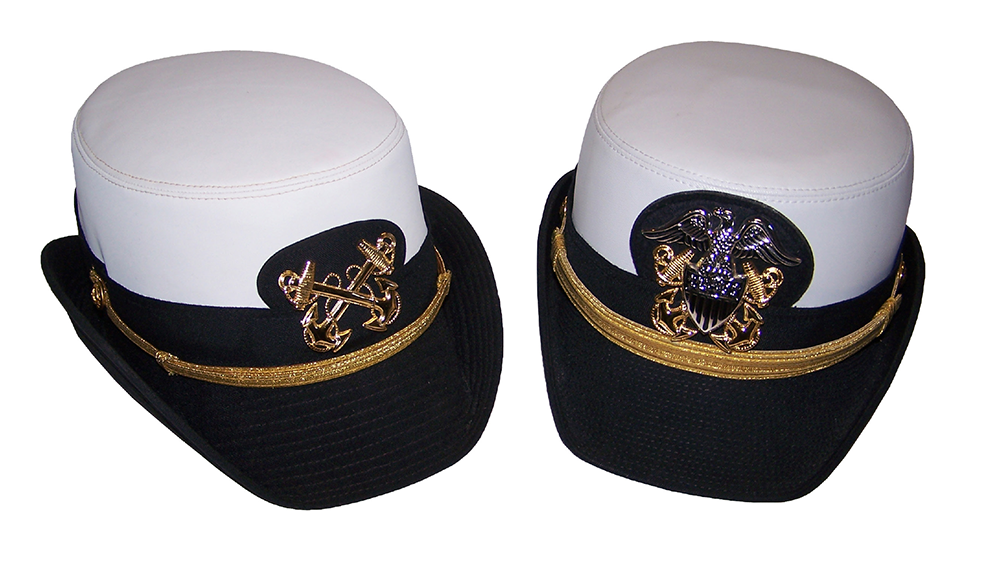 The first women officers began serving in the Navy in 1908 as Nurses. During World War I, nearly 12,000 women enlisted in the U.S. Naval Reserve Force—there were no women officers. All Naval Reserve women were released from active duty, to inactive duty, after the war ended. However, they were not authorized to re-enlist and were eventually honorably discharged. Naval Reserve women would serve again during World War II--this time as both officers and enlisted personnel. However, it wouldn’t be until years after the war ended that the first two Navy women would be selected as warrant officers.

On August 3, 1942, Mildred McAfee was commissioned as a Lieutenant Commander becoming the Director of the Women’s Reserve (WR) more commonly known as Women Accepted for Volunteer Emergency Service (WAVES). During the war, nearly 100,000 women served in the Women’s Reserve as enlisted Sailors (V-10 program) and as officers (V-9 program). In the fall of 1942, the Naval Reserve Midshipmen’s School (WR) located at Smith College in Northampton, Massachusetts began operation. Navy women trained at Northampton until December 1944. Over 10,000 women officers were commissioned during the war.

Initially, the Navy only accepted female civilian college graduates as officer candidates in the Women’s Reserve V-9 program. Women were enlisted as Apprentice Seamen (AS), equivalent to E-1 today, for initial basic training before being appointed as Midshipmen. However, in 1943, Navy enlisted women became eligible to apply for the V-9 program. V-10 enlisted women selected for officer training had to accept a reduction in paygrade to AS upon commencement of officer training. Most of the enlisted women who applied were petty officers. All of the women who graduated from Northampton received a commission as an Ensign VS-W. There were no Navy women warrant officers during WWII.

After World War II, unlike after WWI, women remained on active duty in the Women’s Reserve. However, women were not eligible to serve in the regular Navy and the Women’s Reserve was technically not part of the Naval Reserve but simply an auxiliary. This all changed when congress passed the Women’s Armed Services Integration Act of 1948 (Public Law 625).

The 1948 act contained restrictions on Navy women. The total number of enlisted women in the Navy was capped at two percent of the total Navy enlisted strength, with ten percent of that number being officers. Women officers still only had military authority over other women, and the highest permanent rank obtainable was Commander. Navy women, other than Nurses, served ashore and could not be assigned to combat duty.

The 1948 law authorized 500 women to be commissioned in the Regular Navy during a period ending on June 11, 1950. The appointments would be made in seniority order according to a lineal list prepared by the Bureau of Naval Personnel (BuPers). In addition to women reserve officers, the law also allowed the commissioning of civilian women college graduates and qualified enlisted women. In the fall of 1948, the Navy announced that 288 reserve women officers had been selected for commissions in the Regular Navy. This included 224 Line officers, 39 Supply Corps officers, 21 Medical Service Corps officers, 2 medical Corps officers and 2 commissioned warrant officers.

Alma Helene Plakke was born on November 18, 1911 and living in Chicago when the first WAVES entered the Navy in the fall of 1942. A 1933 graduate of Hope College, Holland Michigan,1 Alma enlisted in the WAVES Women’s Reserve V-10 program on November 7, 1942. Apprentice Seaman Plakke, USNR(WR) reported to the Naval Training School, Cedar Falls, Iowa on 15 December 1942 for basic training.2 Upon completion, she was promoted to Seaman 2nd class (S2c) and transferred to Naval Air Station (NAS) Atlanta, Georgia on January 31, 1943.3

While at NAS Atlanta, Plakke attended Link Trainer school. The Link Trainers, commonly known as the “blue boxes” were flight simulators used to train new Navy pilots and Naval Aviators to “fly by their instruments.” Plakke and other WAVES were instructed in trainer maintenance, assembly, and radio aids to navigation.

SP(T)3c Plakke reported aboard NAS Corpus Christi on March 29, 1943. Shortly after arriving in Corpus Christi, Plakke applied for a commission in the V-9 program and was selected. 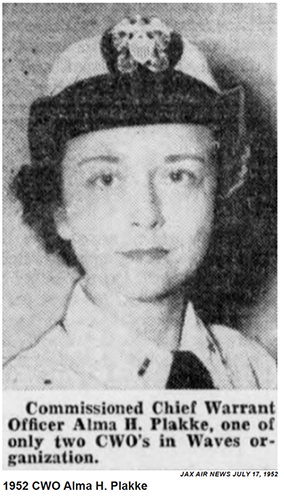 On September 25, 1943 she arrived at the Naval Reserve Midshipmen’s School (WR) at Smith College in Northampton, Massachusetts.5 She was reduced in paygrade back to Apprentice Seamen while attending officer training. On October 19, she was appointed a Midshipmen by the authority Chief of Naval Personnel. On November 11, 1943 Alma Helene Plakke was commissioned as an Ensign W-VS6 and transferred to Naval Air Station Olathe, Kansas. Plakke initially was assigned as an Enlisted Personnel officer and later as a Link Training Officer. After a year at NAS Olathe, Plakke transferred to Naval Aircraft Modification Unit (NAMU) Johnsville, PA. After the war, Plakke, now a Lieutenant (LT),7 volunteered to remain on active duty, until June 30, 1948. Plakke was retained8 and remained stationed in the 4th Naval District at NAMU while the Women’s Armed Services Integration Act of 1948 was being debated in the U.S. Congress.

Marion Elizabeth Cramer was born on November 15, 1910. Prior to World War II, Cramer worked as a physical therapist.9 Marion was living in Minneapolis, Minnesota when she enlisted as an Apprentice Seaman in the Women’s Reserve V-10 program on May 28, 1943.10 On June 28, 1943, she reported for active duty at the U.S. Naval Training School (WR) Bronx, New York. Upon completion for basic training, Cramer was advanced to Hospital Apprentice 2nd Class (HA2c) and transferred to Naval Hospital San Diego on July 20, 1943 for additional training as a Hospital Corpsman.11

HA2c Cramer was promoted to Pharmacist’s Mate Second Class Petty Officer (PhM2c) and reassigned to the Naval Hospital San Diego staff on August, 30, 1943.12 The following month, on September 2, 1943, she was designated as a Physical Therapist. She transferred to Naval Hospital Corona, California on December 14, 1943.13

Six months later, on June 23, 1944, Cramer was advanced to Pharmacist’s Mate First Class (PhM1c).14 Shortly after, she was selected to attend officer training. On September 9, 1944, PhM1c Cramer was transferred to the Naval Reserve Midshipmen’s School (WR) at Smith College in Northampton, Massachusetts. After arriving at Northampton, her classification was changed from V-10 to V-9 and she was reduced in rate to Apprentice Seaman.15 Upon completion of initial officer training on November 11, 1944, Cramer was appointed a Midshipman.16 She was commissioned as an Ensign W-VS on November 28, 1944.

Like Alma Plakke, Marion Cramer volunteered to remain on active duty after the war ended. In 1947, now Lieutenant Junior Grade (LTJG) Cramer was stationed at U. S. Naval Hospital Oakland, California and selected for retention through June 30, 1948.17

Both women made the Navy a career. The Women’s Armed Services Integration Act of 1948 authorized Navy women officers to become Commissioned Warrant Officers (CWO). At the time CWOs were not sub-divided into four pay grades.

In the fall of 1948, LT Alma Plakke and LTJG Marion Cramer were among the first 288 women Naval Reserve officers selected for transfer into the Regular Navy. Unlike the other 286 women officers, both elected to accept a Regular Navy commission as a Chief Warrant Officer (CWO). Alma Plakke became a Chief Ship’s Clerk (CSCL) while Marion Cramer assumed duties as a Chief Pharmacist (CWOHC). The following year, the Defense Reorganization Act of 1949 created four warrant officer grade levels: W1, CW02, CW03 and CW04.

CWO Alma Plakke was promoted to CWO3 (7821) on November 16, 1949.18 She was assigned to the office of the Deputy Chief of Naval Operations for Air in Washington, DC. Plakke served as secretariat for the Aviation Personnel Division Chief. In 1952, CWO3 Plakke was stationed at Naval Air Technical Training Center (NATTC), Naval Air Station Jacksonville as the assistant to the Military Personnel Officer.19 On November 16, 1955 she became a CWO4 (7821).20 CWO4 Alma Plakke (Baker) was voluntarily placed on the retired Naval officer’s list, as a Lieutenant, in March 1964. CWO4 Alma Helene Plakke Baker died on April 4, 1997 and is buried at Fort Custer National Cemetery in Augusta Kalamazoo County Michigan.

In 1948, Marion Cramer remained assigned to U.S. Naval Hospital Oakland, CA. She was promoted to CWO3 (8171) on February 16, 1950. During the Korean War, CWO3 Cramer worked as a physical therapist helping to rehabilitate injured personnel. She was promoted to CWO4 on February 16, 1956. CWO4 Marion Cramer (Baker) retired from the Navy in February 1966 upon reaching the statutory retirement age of 55. She was placed on the retired list as a LTJG. CWO4 Cramer died on March 25, 1999. 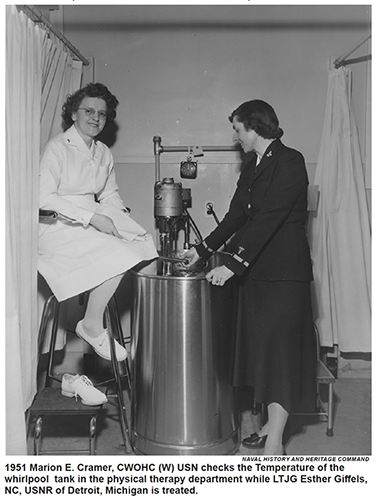 Women warrant officer numbers remained at low levels for the next twenty years. In 1954, there were only four, all in the Regular Navy.21 By 1960 there were ten, only growing to twenty-eight by 1988. In 2013, there were 84 women Chief Warrant Officers representing 5 percent of the 11,087 female officers in the Navy and Navy Reserve. Today, in 2016, 116 women chief warrant officers serve on active duty in the Navy.

On October 9, 2002, the Secretary of the Navy announced the implementation of the CWO5 grade in the Navy. NAVADMIN 337/02 specified that the first CWO5 promotions would occur during the FY-04 selection board cycle. On October 1, 2003, CWO4 Leon A. Cole, stationed aboard USS Ronald Regan CVN-76, became the first Navy officer, along with being the first African American, promoted to CWO5.22 Two years later, on November 1, 2005, CWO4 Valerie Baty became the first women promoted to CWO5.23 She was followed three years later by CWO4 Donna Gialone who was promoted while stationed in Naples, Italy. CWO5 Gialone became the first African-American women to achieve that rank.24 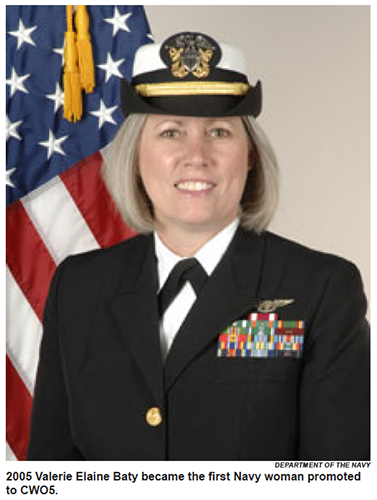 Alma H. Plakke holds nearly all the “firsts” in the CWO promotion category for Navy women. She was one of the first two (and most senior) Navy women to become CWOs. She also became the first female CWO3 and CWO4. Marion E. Cramer was a close second in the CWO3 and CWO4 categories. Both women, who are generally unknown today, were trailblazers and role models during their long Navy careers. Their unique service as chief warrant officers in the nearly all-male Navy officer corps during the height of the Cold War cannot be understated. Today, women warrant officers still only represent five percent of the Navy warrant officer ranks. However, they are no longer unique thanks to the “forgotten two.” 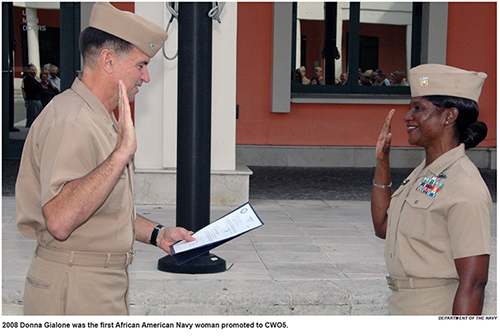