authored by and used with the permission of Justin T. Broderick from uniform-reference.net

The original warrant officers of the U.S. Navy (boatswains, gunners, carpenters and sailmakers) were distinguished for many years by plain, unadorned uniforms without the insignia and trim of commissioned officers. In the uniform regulations of 1852, warrant officers were authorized to wear gold-laced buttonholes on each side of the collar for full dress, but nothing was said about undress uniforms.1 Period photos indicate that plain frock coats were commonly worn. The first regulations to differentiate the different warrant ranks were those of January 1864.

Though masters' mates (later simply mates) were not always appointed by warrant, their uniforms were generally regulated similarly to those of warrant officers, and so will also be considered here.

The Civil War brought many changes to the Navy's uniforms, and in 1864 regulations appeared that were the first to authorize insignia that would distinguish the different warrant officers from each other.2 On the navy blue frock coat – the everyday dress of the naval officer – the warrant officers were authorized to wear shoulder straps of plain gold lace, three-quarters of an inch wide. Boatswains and gunners, as line officers, were to wear the newly-introduced star on the lower sleeve. Carpenters and sailmakers wore plain sleeves. To distinguish the different specialties, boatswains' shoulder straps were to have a silver "B" in the center and carpenters' a "C" while the other two officers' straps were to be plain. Mates and clerks wore single-breasted frock coats rather than double-breasted.

The warrant insignia of 1864 stayed in place with the illustrated uniform regulations of 1866. In 1867, however, a general order authorized shoulder straps for clerks and mates, making their insignia the same as carpenters and gunners.3

In March of 1869 Navy Department General Order 90 eliminated shoulder straps for warrant officers.4 Instead, they were ordered to wear devices on the collar of the frock coat. Boatswains and gunners wore a star, similar to that on the sleeve, and carpenters and sailmakers wore a lozenge or diamond. Once again there was no provision to distinguish all the warrant ranks from each other. Clerks and mates were to wear a doulbe-breasted frock coat similar to other officers, but with medium-sized instead of large buttons. They were also to wear the line star on the sleeve. New cap devices were also introduced: crossed anchors for warrant officers and a plain anchor for mates. On the sack coat, worn as "working dress" and off duty, warrant officers and mates wore no insignia except for the line star if appropriate.

In January 1877 a new service dress coat was introduced for commissioned officers of the navy.5 More military in design that the civilian-derived sack coat which it replaced, it was trimmed with black mohair braid and had a standing collar with rank devices. It would be pattern for officer's service dress for more than forty years. Warrant officers were authorized to wear this uniform in 1878, but the author has not been able to locate a copy of this order.

The uniform regulations of 1883 introduced different devices for each warrant specialty.6 The new insignia would be in silver for those warrant officers who had 20 years seniority in grade, and in gold by others. In addition to the frock coat collar, the new insignia would be worn on the standing collar of the new blue service coat. The insignia for sailmaker was the lozenge formerly used for both sailmakers and carpenters. For the first time, Paymaster's Clerks' insignia was grouped together with warrant officers, including a common cap device, though the Paymaster's Clerks were not authorized the silver devices for long service.

A carpenter and gunner of USS Boston, in 1888, wearing blue service dress of the 1883
regulation. No devices were worn on the sleeves of the service coat till 1897.
Photo from the Naval History and Heritage Command.

The uniform regulations of 1897 prescribed the same gold stripes and corps devices for the blue service coat as worn on the frock coat.6 For warrant officers, this meant that boatswains and gunners began to wear the line star on the service coat sleeve.

Some significant changes were reflected in the uniform regulations of 1899.7 To give long-serving warrant officers the prospect of promotion, the Naval Personnel Act of 1899 had authorized the ranks of chief boatswain, chief gunner, chief carpenter, and chief sailmaker.8 These were commissioned grades that ranked with but after ensigns. The sleeve insignia adopted for these new ranks was a half-inch gold stripe, similar to an ensign's, but broken with segments of blue silk. For collar insignia, commissioned warrant officers used the silver devices previously worn by warrant officers of 20 years service.

Shoulder marks for wear on white uniforms were introduced for commissioned officers in 1899, but were not authorized for grades below ensign. 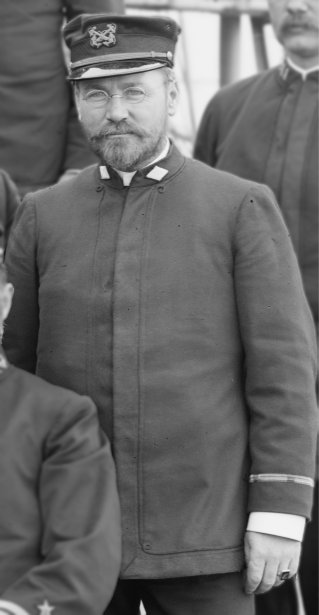 In January 1900 the insignia for warrant machinist was changed to a three-bladed propeller.3

The Naval Personnel Act of 1899 allowed officers who had served "with a creditable record" in the Civil War to be advanced to the next higher rank upon retirement. Commissioned warrant officers to whom this applied would rank with lieutenants (junior grade), and the 1905 uniform regulations prescribed insignia for these officers should they have occasion to wear uniform in retirement.10 The 1905 Navy Register listed 22 retired officers in this category.11 Provisions for such insignia were included in the uniform regulations until 1922.

A 1908 change to the 1905 edition of the uniform regulations authorized shoulder marks for warrant officers, as commissioned warrant officers had worn since 1901. Corps devices were also introduced to CWO and WO shoulder marks, somewhat diverging their shoulder and sleeve insignia and resulting in a "two-tone" appearance for CWOs.12 As the new devices would take the place of the line star they had formerly worn on their shoulder marks, a small contrasting star was added to the devices of line commissioned warrant and warrant officers. The same order changed the style of the frock coat from one with nine pairs of buttons to one with five pairs and a different style of lapel and collar.

In March 1909 an act of Congress shortened the title of "warrant machinist" to just "machinist," and provided for the commissioned warrant rank of chief machinist. In December 1909 machinists and chief machinists were classified as line officers and the line star was added to their insignia.3

A new edition of uniform regulations was issued in January 1913 and contained several changes.13 Chief pharmacists had been authorized in August 1912, and the new order not only provided for this new rank but changed the pharmacist's device from the Geneva cross to a caduceus. Shoulder straps were eliminated for all officers which, for commissioned warrant officers, meant a return of their corps devices to the frock coat collar. Contrasting stars, previously worn only on shoulder marks, were also added to collar devices of line commissioned warrant and warrant officers. The shoulder marks, adopted in 1899, were eliminated for white uniforms in favor of white cloth shoulder loops worn with metal pin corps insignia. The latter development was short lived: The shoulder marks were restored by a change order six months later.14

In March 1915, Congress officially changed the title of paymaster's clerk to "pay clerk," though in practice that term had been in use for some time, and authorized the commissioned warrant rank of chief pay clerk.15 The corps device for chief pay clerks was gold, the same as for pay clerks, the change order noting "the uniform of Chief Pay Clerk differs from that of Pay Clerk by the addition of the sleeve stripe only." This avoided using the same collar device in silver, which was the insignia of commissioned Pay Corps officers of ensign rank.